We believe that our success is tied directly to the success of our clients. That’s why, when we heard that T Bar 1 Transport had won Business of the Year in Lloydminster, we couldn’t pass up the chance to talk to them about their history, their current operations, and their use of Tallys.

In January 2014 we spoke with Jason Newman, who along with his father, owns T Bar 1 Transport. The Newman family started the company in 2002 with one truck – a one ton with a 3-ton picker – doing hot shots for the oil industry in Lloydminster.
Both Jason and his Dad were working other jobs at the time, but it didn’t stop them from growing the company. Within 4 years, they’d grown to having 3 hot shot trucks. What followed was a big, if calculated, risk. They quit their regular jobs, and started working on the business full-time. They bought their first main picker, a 25 ton knuckle picker, and Jason joined the company to answer the phone and do sales.
Things were going well, up until the market crashed in 2008. Jason talks about the difficult decisions that they had to make, to ensure that T Bar 1 could stay in business.

“We went through the 08 crash, and decided we needed to make some changes in what we were doing. We were too reliant on third parties and different people for work, and not dealing enough directly with the oil companies. So we decided one of the avenues we would go in was a pipe yard.”

T Bar 1 acquired some land for a pipe yard, starting with their new vision of dealing directly with the oil companies. Their operation grew, and so did the yard. It wasn’t long before the big players took notice. T Bar 1 had been presented with their first big opportunity; a major oil company in Lloydminster offered them the chance to handle their tubing. There was one condition, T Bar 1 would have to start using a professional system to manage their tubular goods; that’s when Tallys entered the picture.

Jason talks about the decision to start using Tallys in their pipe yard:

“So, we checked into it, and Tallys came highly recommended. We did some background, and some of the major pipe yards around Alberta already used them. Talks began, and we installed the system, and it’s worked great for us.”

How Tallys Solved their Problem

Before Tallys, the team at T Bar 1 Transport had been using a complicated system of excel spreadsheets to manage their inventory. Jason explains that it was less than perfect.

“Tubing would get delivered, so we’d write it in the dispatch book. Then the joints would need to go on the rack and be counted, tallied. Then we’d bring that count in and enter it into the excel system we built. We’d have to enter it manually every time. Then when joints left the yard, we’d have another sheet where we marked outgoing joints. We always had to remember that when we added a record to the outgoing sheet, we’d have to remove those joints from the inventory sheet. It was a lot of work.”

“With that old system, there was just so much room for error. In the end, we created a third sheet, to mark down every job that happened, so if all of a sudden something was missing, we had a third one to back check on. Then we had someone in the back office checking for errors.”
“There was a lot of manual checking and adding. A lot of room for mistakes.”

Jason talks about the difference Tallys made in their day-to-day operations:

“With Tallys, it allowed us to have a system where, once you have the name of the company you’re sending joints out to or getting joints from, it does all the work for you. Tallys helped us, because it shortened the amount of time we had to spend on entering things into the system, so it increased our efficiency, and there were way fewer mistakes. It was a really beneficial thing.”

Business of the year

In 2013, T Bar 1 Transport was named Lloydminster’s Business of the Year. When we asked Jason about the award, he says it comes back to family and community.

“We’re a family run business. Besides me and Dad, there’s 5 other family members here. 7 out of 35 people here are family. I think that puts us on the map as being different.”

“We’re from here. When people know who you are, to see you take a company that started with one truck, and to grow it yourself, to grow it in 11 years to 35 people and 20 units on the road. I think people recognize that.”

Jason lists off literally dozens of groups: 4H and the Agricultural Society, Minor hockey, Relay 4 Life, and the Terry Fox Run are just a few. He estimates about $50,000 in charitable contributions. Jason also attributes the recognition to the changes in their operations in recent years. He acknowledges that Tallys was a big part of what allowed them to be more competitive, and a contributor to their current success.

“We had done a massive change. We used to run with a lot of owner operators. After a massive restructuring, we decided to buy all of own equipment instead. That made us more competitive with the trucking, as a complement to our pipe yard. Tallys was part of that. Once we added Tallys, we were suddenly a viable option for the major oil companies in Lloydminster.”

“Basically, in a matter of two and half years, we turned it around to be a major competitor.”

In for the long haul

T Bar 1 Transport is showing no signs of slowing. The company is currently exploring expansions for their pipe yard, looking at an additional 10 acres. It’s a response to customer demand, Jason says. It comes from running an efficient operation, and focusing on customer service.
“People like to deal with us because of our customer service and efficiency. They get their pipe on time, they get it at a reasonable price, and they get to deal with good people.”

T Bar 1’s approach to customer service is a simple one, but one that makes a lot of sense for a family-run business with deep community roots.
“Treat people how you want to be treated. When things go well, everybody’s happy. When there’s a problem, don’t worry about what went wrong, you just push through the problem. You step through it and fix it. Get into the other company’s shoes, see what they’re asking for, think about what they need. You can look back later and figure out what went wrong.”

In addition to great customer service, Jason is looking forward to building long term value for the people at T Bar 1 Transport. He says that the company’s increased self-reliance over the years has done more than bring them success, it also gives growth opportunities to the people that work there.

“It’s good that we can give people a trade. Someone can start at the ground level, working in the yard. They can move up to a swamper, then move up to a 1 ton. From there, they can get their class 1, move to a 5 ton, then get their picker apprenticeship, move to 20 ton, finally, get their journeyman a ticket and be a 45 ton picker operator. It’s a trade, and it’s important to give people a career and a trade and to grow doing what they enjoy doing. It’s great that we’re able to offer that to people.” 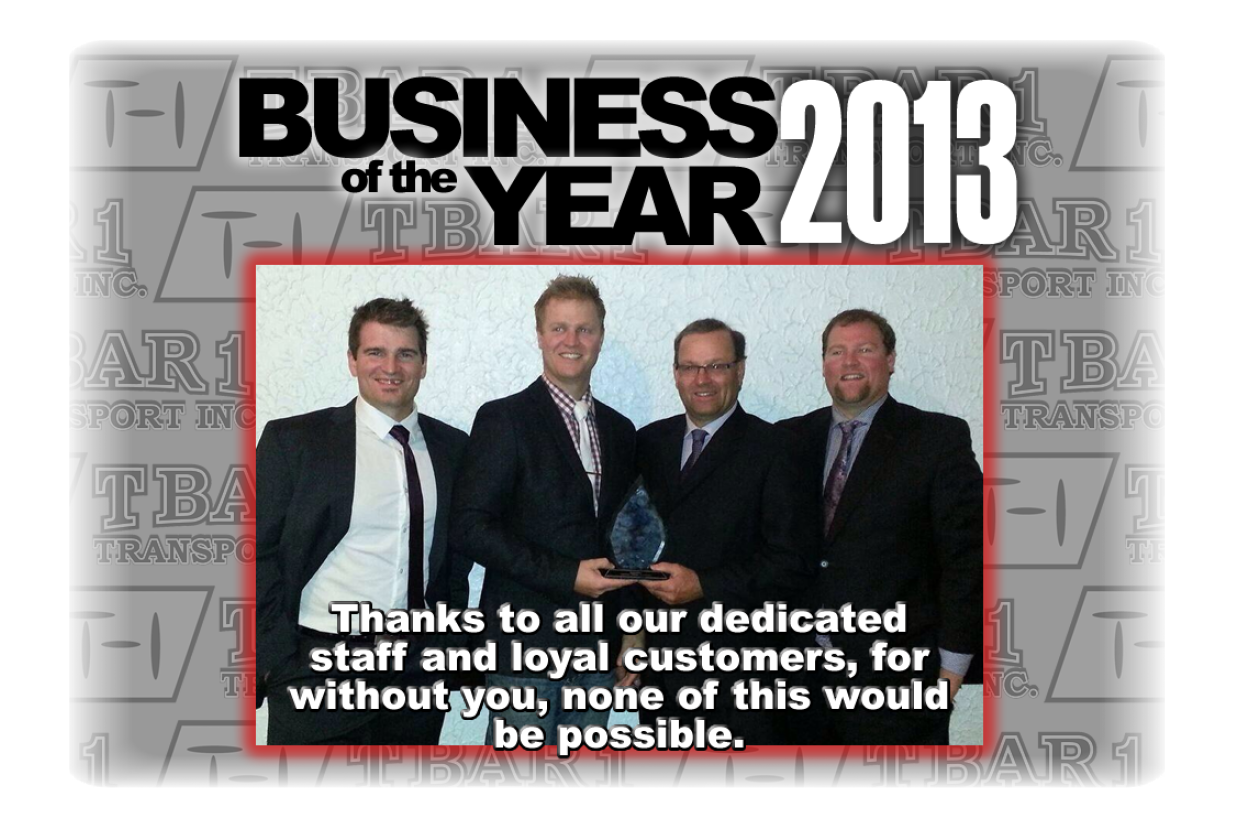